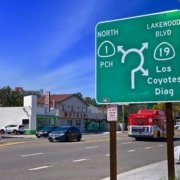 The Long Beach Traffic Circle also referred to as the Los Alamitos Traffic Circle was once called “the Wildest Ride in Town” by the Los Angeles Times.  Second, to the Queen Mary, the traffic circle is one of the most recognizable features in Long Beach.  Moreover, the loop is one of the only modern roundabouts in Orange County.  The roundabout which now serves approximately 60,000 drivers a day was designed in the 1930s by German Engineer, Werner Ruchti.  At the time, the City of Long Beach constructed the Long Beach roundabout to accommodate traffic for the upcoming 1932 Summer Olympics.  While the Olympics were set to be held in Los Angeles, aquatic and rowing events were held in Long Beach.  The Long Beach Traffic Circle’s novelty has led to the excitement and confusion of drivers. Often these drivers end up in automobile collisions or near-miss situations.

In 1980, after nearly fifty years of service, the Long Beach Traffic Circle was considered one of the most unsafe intersections in the city. In a November 2002 article of the On-line Forty Niner, city traffic engineer David Roseman explained just how dangerous the roundabout had been.  Roseman stated, “In the city of Long Beach, we have a grading system for accidents.  An ‘A’ is for best, and an ‘F’ is for worst.  In the 1980s the grade level was almost an ‘F.’”

Despite negative safety grades, city personnel described the Long Beach Traffic Circle as a model of safety.  In 1989, Traffic Enforcement Cmdr. Charles Parks stated that there were so few automobile accidents at the roundabout that it would be a waste of time to count them.  The theory was that without red lights, vehicles in the traffic circle could flow freely.

Furthermore, with each vehicle entering the traffic circle at a forty-five-degree angle, head-on collisions were thought to be nearly impossible.  The most serious of car accidents thought possible were expected to be broadside collisions, and the most frequent were anticipated to be safer sideswipe collisions.  Nonetheless, drivers were quoted by the Los Angeles Times denouncing the circle, “when I was 19 I drove out of London the wrong way, and I felt safer.”

After residents and drivers continued to complain about the Long Beach Traffic Circle, safety changes took place in 1993.  In 1993, the Long Beach Traffic Circle became a true roundabout.  Caltrans spent approximately eight years reimagining the circle to improve its safety.  Some of the changes to the traffic circle included removing stop signs and replacing them with yield signs. Other changes included flaring the entry point lanes, and adding lane markers before the entrance to the circle.  Other recommendations by Caltrans went ignored.  Some changes such as lowering the speed limit and adding lane lines around the center island were deemed too expensive.   Even without the additional changes, Traffic Engineer Roseman stated that there was a forty-four percent drop in accidents eight months after the construction changes.

Today, the traffic circle remains a point of contention throughout the community, and the future of roundabouts in Southern California is not certain.  As reported initially by KCET, the Insurance Institute for Highway Safety argues for more or them.  Whereas, other internet forums contain countless stories praising and vilifying traffic circles. Drivers concerned with safety, as well as those focused on saving money on insurance rates and car insurance quotes, are likely to be vocal in the outcome of roundabouts in California.

Nonetheless, serious automobile collisions routinely occur at the Long Beach Traffic Circle.  As discussed above, the design of the traffic circle was intended to cut down on the seriousness of crashes at the roundabout. As a result, it could be expected that there would be less personal injury lawsuits.  However, over the past few years, the roundabout has seen accidents involving pure property damage, catastrophic personal injury, and even the wrongful death of riders.

A review of traffic accidents from 2015 – 2017 reveals that many of the traffic circle’s car accidents may have been avoided had the city chosen not to forego some of their recommended changes.  Specifically, had the city lowered the speed limit of the roundabout and added lane lines inside the roundabout, some of the collisions might have been avoided.

Support for this hypothesis can be found by utilizing the TIMS | SWITRS GIS Map provided by UC Berkeley.  The SWITRS tool pools data as reported by the California Highway Patrol and Department of Transportation to map vehicle collisions by location and cause.  The tool demonstrates that from 2015-2017, twenty-six vehicles were reportedly in car accidents at the Long Beach Traffic Circle. At least twenty-one individuals were injured at the Long Beach Traffic Circle in these two years.  On three occasions, the cited cause of the collision was “improper turning” or “merging.” Four other times, the vehicle collisions resulted from unsafe speed violations.  Finally, on five occasions the cause of car accidents was determined to have resulted from unsafe lane changes.  In total twelve out of fifteen car accidents over two years had to do with one of these three collision factors.

Unfortunately, some of the most dangerous car accidents at the Long Beach Traffic Circle have occurred when drunk drivers encounter the novel traffic device.  As reported by the Long Beach Post, in March 2016, a suspected drunk driver of a Maserati in the outer traffic circle hit a tree.  As a result, the Maserati was sheared in half.  The alleged drunk driver was ejected from the vehicle but survived.  Sadly, the passenger, Joseph Testone, died at the scene. 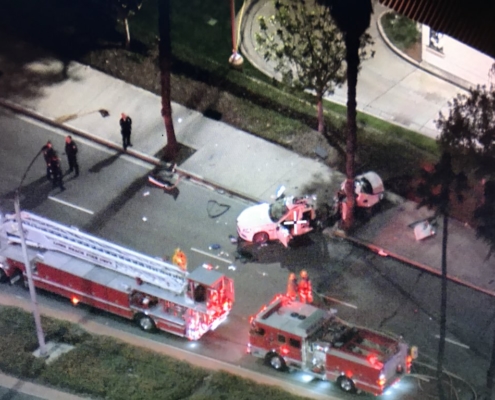 In sum, car accidents at the Long Beach Traffic Circle have occurred and will continue to happen.  Considering the volume of vehicles that utilize the roundabout, some say the roundabout is safer than the average intersection.  However, the novelty of the roadway requires that drivers take every precaution when navigating the roundabout and ensure that they follow all of the rules of the road for the traffic circle.  If you believe that there is a drunk driver in the street, call the Long Beach Police Department.

If You Have Been in a Car Accident in the Long Beach Traffic Circle Contact a Local Personal Injury Lawyer Right Away!

If you have been in a car accident at the Long Beach Traffic Circle, call a personal injury attorney right away. Make sure you gather all of the other drivers’ auto insurance information.  No one article can cover everything that people should know after a car accident.  Additionally, car accidents in the roundabout present unique legal challenges.  There are many local personal injury law firms throughout Long Beach, Seal Beach, Huntington Beach, and Newport Beach that can help.  Contact a lawyer right away to protect your statute of limitations, and ensure that you receive full justice for your claims.  Don’t let an insurance company lowball your demand for reimbursement of medical expenses, lost wages, or pain and suffering.

The information contained in this post is for general information purposes only. Nothing on this post, or website, should be taken as legal advice for any individual or case situation. This information is not intended to create, and receipt or viewing does not constitute an attorney-client relationship.  If you have lost a loved one or have pain and suffering from a personal injury, we are available to assist.  For more information visit our wrongful death page, and car accidents page. For a free consultation, please reach out to our attorneys to arrange a time to discuss your case.  All you have to do is hit the big blue button labeled Contact Us at the top of this page!